The European Federation for Medicinal Chemistry and Chemical Biology, as a learned society, supports all members of the medicinal chemistry and chemical biology community.

EFMC actively promotes equal opportunities, honesty, fairness, transparency, and aims at an inclusive representation of all its members in its activities. It acts with the highest degree of professionalism and ethical values, stands up for the principles it promotes, and strives to have a positive influence in the scientific community. It encourages diversity of views, and participation in its initiatives and scientific events independently of gender, nationality, personal characteristics or circumstances.

EFMC is firmly committed to representing its members in a way that reflects the diversity of its community. It encourages all medicinal chemists and chemical biologists to support these efforts.

As discussed in details in “50 Years European Federation for Medicinal Chemistry (EFMC) - The Ascent of Medicinal Chemistry in Europe” by Edmond Differding, [1] and based on a thorough analysis of congress participation, several trends have been shaping the medicinal chemistry community over the last decades.

There is an increased participation of scientists from academia. Originally EFMC-ISMC (International Symposium on Medicinal Chemistry) meetings attracted a large majority of participants from industry, with over two thirds of industrial attendees until the late 1990s (Figure 1). This changed at the turn of the century, and has now stabilized at ca. 55% academic participants. 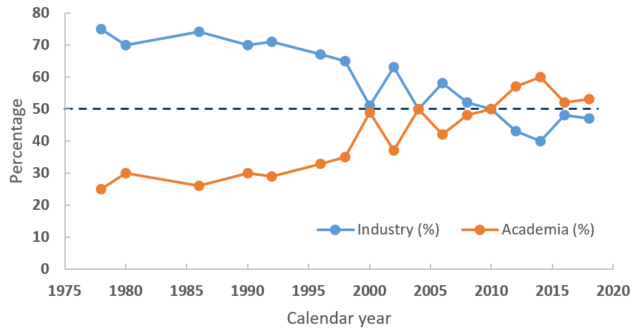 The medicinal chemistry community becomes more gender-diverse. The percentage of females in the community was below 8% in 1970, when chemistry-related disciplines were essentially an activity of male scientists. Since then, a continuous change occured (Figure 2). In 2018, attendees at EFMC-ISMC were 35% female, a figure close to the European average of 40% women among scientists and engineers. This figure increases to 52% when considering only students and postdocs.

The profile of ISMC session chairs has evolved in parallel, as illustrated by the program of the 2020 Basel meeting (postponed to 2021), where female scientists represent 37% of the session chairs. EFMC aims to achieve a percentage of male and female speakers representative of the proportion of both genders in the community. Two of the five members of the International Organizing Committee, who are responsible for the program, are female, confirming the increased involvement of female scientists in EFMC activities. 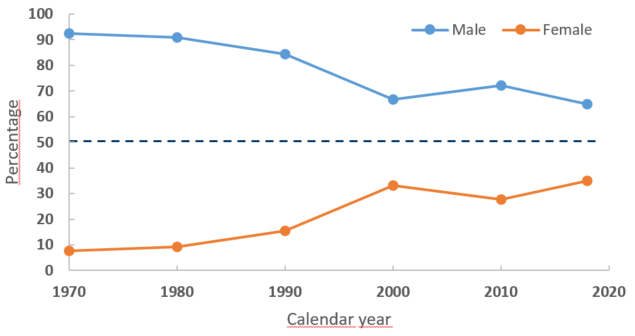 The representation of female delegates in the EFMC Council has followed a similar trend, with a delay largely due to the measured turnover rate of these positions. From 4% in 1985, it reached 24% in 2020. The delegates at the EFMC Council are elected by national organizations, and this trend is an encouraging sign of increased diversity within the EFMC community. We expect a further reduction of the gender gap, driven in particular by the increasing participation of EFMC’s youngest members, as discussed below.

Younger scientists are more actively involved in shaping the medicinal chemistry community. Over the past ten years, the percentage of student participants in EFMC-ISMCs has reached close to thirty percent, encouraged by the creation of the EFMC Prizes for Young Medicinal Chemists, the Young Medicinal Chemist Symposium (EFMC-YMCS), and travel grants for young scientists. Since 2019, the Young Scientists Network (EFMC-YSN) offers an increasing number of networking and scientific events, as well as a mentoring program. You can find more information about the YSN in “The Young Scientists Network - How the European Federation for Medicinal Chemistry became young again” [2]. With regard to gender diversity, the YSN shows a 1:1 gender ratio, has a female chairperson and a Board composed of 58% women.