To celebrate the 50th anniversary of the EFMC with the greater community, the EFMC Communication Team is launching a Quizz!

The Quizz will mix scientific questions & questions about the EFMC.

3 Winners will be selected from the correct answers and they will win an "EFMC GoodieBox!" full of surprises!

Be quick, the Quizz will end on March 31!

In 2020, the European School of Medicinal Chemistry (ESMEC) celebrates its 40th anniversary. To mark the occasion ESMEC is launching the first ESMEC Alumni Award.

The ESMEC Alumni Award will be given to an outstanding European researcher in the field of Medicinal Chemistry who has participated in the school either as an oral or poster presenter.

The prize consists of a diploma, a medal and an invitation to give a presentation at ESMEC 2020 (Urbino, Italy, June 28th – July 2nd).

Applicants are invited to fill in the enclosed form and to send the CV and a Proof of Participation with an oral or poster communication (Esmec Certificate of Participation and/or Abstract presented) by e-mail, stating in the subject box “ESMEC Alumni Award”, to:

It’s with great pleasure that we release the first of our series on Best Practices in Medicinal Chemistry.

This one is dedicated to “validating chemical probes”. High quality chemical probes are essential to explore human biology and diseases and as chemists, we have a big role to play to ensure high quality of the published probes.

Files can be found under this link.

This  year marks the eighth occassion of the IUPAC-Richter Prize, which was established in 2005 by IUPAC (International Union of Pure and Applied Chemistry) and Richter PLC. Awarded biannually, the awardee is announced by IUPAC following nominations and the decision of an indepedent international Selection Committee. According to the rules of the prize the awardee is expected to give two lectures,  one in Europe and one in the United States, at international symposiums on medicinal chemistry. The lecture in which the prize is awarded occurs alternatively in Europe and in the United States. The awardee receives $ 10 000, which is sponsored by Richter PLC,  and a plaque, which is presented by IUPAC.

To kick off our 50th anniversary celebrations, we would like to recognise the immense contribution of those who not only brought EFMC into being in December 1969 but have helped to make it what it is today. We are, therefore, very proud to announce the award of the first EFMC Honorary Fellows.

The first recipients have created and nurtured the mission and vision of EFMC during its first 50 years. All are former Presidents but have been contributors above and beyond and remain active supporters of EFMC. Congratulations and thanks to:

Additionally, due to his contribution in launching the series of EFMC-YMCS events, we are happy to recognize also:

The official ceremony will take place during the opening of the XXVI EFMC International Symposium on Medicinal Chemistry (EFMC-ISMC 2020), scheduled to take place in Basel, Switzerland from September 6-10, 2020.

The EFMC recognition programme will continue awarding outstanding contributors to EFMC and sciences in the future with a system of open call for nominations – to be launched in fall 2020.

The official EFMC Yearbook 2020, "Medicinal Chemistry in Europe" is a valuable resource for those interested in quickly finding information on all things EFMC, such as the activities and composition of Member Societies, Corporate Members and the activities and events of EFMC and its working groups.

It is available to view online or to download and keep.

Annually, EFMC funds grants with the aim of supporting the participation of young academic scientists to EFMC organised events.

We are in the process of compiling and writing a history of EFMC, more of which in the coming months. As part of this, we are collecting pictures that illustrate the first 50 years. If you have photos from EFMC events or EFMC activities, please share them with us. They will add tremendously to the written narrative. We would be very grateful.

Events and EFMC-related activities we would be delighted to hear from you. Please get in touch with us at administration@efmc.info.

A step forward for Medicinal Chemistry recognition in Europe 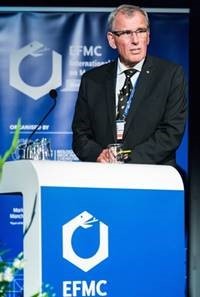 For many years the lack of a visibility of medicinal chemistry as a scientific discipline within the panel structure of the European Research Council (ERC) was a limiting factor for medicinal chemists to submit grant applications and to be successful.

The European Federation for Medicinal Chemistry (EFMC) invited Prof. Klaus Bock, at that time Vice-President of ERC, to present a lecture at the opening ceremony of its flagship event, the International Symposium on Medicinal Chemistry (EFMC-ISMC) in Manchester, August 2016. During a follow-up meeting with him, the EFMC President and President-elect discussed this matter and showed the important position of medicinal chemistry in the scientific landscape.

We are grateful that medicinal chemistry is now listed for the first time as a keyword (PE5_18) in the Synthetic Chemistry and Materials Panel (PE5) of the Physical Sciences and Engineering field. This is adopted for all 2019 calls for Starting, Consolidator and Advanced Grants within ERC.

We hope that this will largely increase the visibility of medicinal chemistry within ERC, that rapidly became the most prestigious funding body to support excellent, investigator-driven frontier research in Europe.

We wish all scientists a lot of success in submitting their grant applications in one of the ERC calls.